This piece was inspired by the children’s desire to forcefully stomp on a wide variety of objects in the museum that were not meant to be touched, and by the popular arcade game Dance Dance Revolution. In this game, the player must perform dance steps displayed on a screen by stepping on correlating symbols on the floor. I am particularly drawn to the way this game involves players in what generally turns into an awkward, embarrassing series of movements as the steps become harder and harder to master.

Whereas Dance Dance Revolution dictates the movements of the participant, “Drum Machine” created an experience in which children were enticed to make up their own free-form rhythms as they physically explored the sculpture. Drum Machine was a stage with wooden posts sticking up through the floor and attached to spring-tensioned levers beneath the stage. When stepped on, these levers pulled cables that caused the drumsticks to strike several drums that were mounted above the participants. The drums were also lit from behind, creating a combined visual and auditory experience like that of Dance Dance Revolution. As hoped, the piece encouraged both individual performance and communal interaction as multiple “players” learned to stomp together in different patterns and rhythms. 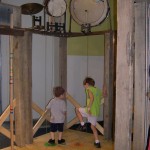 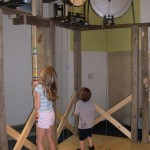 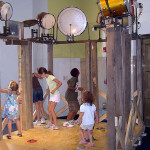 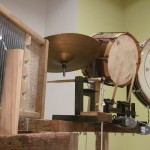 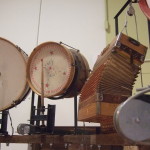